Show all categories Return of electronical equipment Back

The following notices are intended for private households which use electrical and/or electronic equipment. Please observe these important notices in the interest of the environmentally friendly disposal of waste equipment as well as your own safety.
1. Notices on the safe and proper disposal of electrical and electronic equipment and on the meaning of the symbol according to annex 3 of the German Electrical and Electronic Equipment Act (ElektroG):
Owners of WEEE (waste electronic and electronic equipment) are required to dispose of it separately from unsorted household waste. WEEE must not be disposed of as unsorted municipal waste and is not to be included with household waste. WEEE must be collected separately and disposed of such as via a local recycling facility.
Owners of WEEE must also remove waste batteries and accumulators, provided these are not enclosed in the WEEE, before disposing of the WEEE at a collection point. The latter does not apply insofar as the WEEE is separated according to section 14, paragraph 5, clauses 2 and 3 ElektroG as part of the public disposal authority’s opt-in to prepare WEEE for reuse, to then prepare it for such reuse.
Under annex 3 ElektroG, owners of WEEE can identify based on the symbol whether WEEE is to be disposed of separately from unsorted household waste at the end of its service life. The symbol for WEEE that is to be collected separately is represented by a crossed-out wheeled refuse bin with the following design:
Notice on the safe and proper disposal of batteries 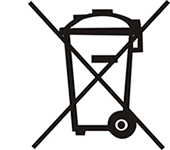 If you would like to return WEEE purchased from us, you can request a free-of-charge consignment note to return the WEEE by emailing info@jb.eu.
Domestic owners of WEEE can also return their WEEE to public waste collection points or at collection points provided by manufacturers or distributors in the sense of the ElektroG. For an online list of collection and return points, see: www.ear-system.de/ear-verzeichnis/sammel-und-ruecknahmestellen.jsf [link in German]
3. Data protection
Some sensitive personal data may be stored on devices to be disposed of (such as a PC or smartphone) which should not fall into the hands of third parties.
End users of WEEE are responsible for deleting personal data on the WEEE to be disposed of.
This website uses cookies to ensure the best experience possible. More information...